When I agreed to host this month’s History Carnival, I was looking forward to seeing the wealth of talent in blogging across all historical eras – and I was not disappointed. My research and writing is usually restricted to the Victorians with occasional forays into the Edwardian and WW1 periods. Reading the outstanding blogs from all kinds of history and other eras was both liberating and exciting, akin to visiting a new country for the first time. I decided not to follow a particular theme but just chose subjects which I found interesting. I hope you enjoy reading my selections as much as I did. 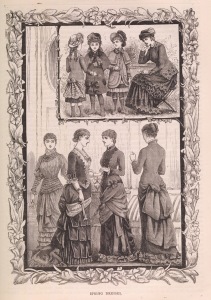 From the British Library’s Untold Lives blog came the strange tale of the ‘Deliberately Dangerous Beard’ which sparked angry scenes at a church in 1843. As it was posted on 1 April, I thought it might be an April fool but no, it’s true!

Two Nerdy History Girls highlighted some ‘Interesting Births, Marriages & Deaths in 1817’ including runaway brides and a woman giving birth to her twentieth child.

On the Imperial & Global Forum, Paul Doolan explains how the ‘Dutch Imperial Past Returns to Haunt the Netherlands’ and has forced Dutch courts to acknowledge and apologise for the massacre of hundreds of civilians in Indonesia during decolonisation between 1945 and 1949.

Over at Khronikos, Greg Rogers discusses the role of ‘Iroquois Informers: Spies, Knowledge and Empire in the Northeast Borderlands’ in crossing imperial boundaries and returning with intelligence for the British and French.

At the Art and Architecture, Mainly blog, Helen Webberley offers her view of the History Channel’s Churchill & The Fascist Plot in her post on ‘Archibald Ramsay, the Right Club and British Fascism’.

Jonathan Willis at The Many-headed Monster blog tells the tale of Goodwife Dannutt who was driven to distraction by noise in his post on ‘Elizabethan ‘madmen’ Part II: Nightmare Neighbours and Tudor ASBOs’.

For St George’s Day, the British Library’s Medieval Manuscripts blog looked at the ‘Anatomy of a Dragon’ and how the creature was portrayed in medieval illustrations; this post has some beautiful accompanying images taken from the manuscript collection.

In ‘This is not a test’, Ian Curry at Vaguely Interesting discusses the shocking nuclear test which took place near Totskoye in the southern Urals in 1954 and the human consequences for 45,000 of the Soviet Union’s own troops.

On the Vintage Everyday blog, you can read about the exuberance of ‘Two Young Girls Bicycling Across America in 1944’, inspired by Mark Twain; scroll down the post to find the link to the girls’ full diary entries.

Over at The Pirate Omnibus in ‘Expressing Your Love’, Simon Abernethy explains how Victorian railways aided elopements and how another new invention, the electric telegraph, helped to thwart them.

In ‘The Anzac Day Silence, Religion and Garland’ at Stumbling Through the Past, Yvonne Perkins looks at how the Christian rituals associated with Anzac Day came about, 98 years on from the first commemoration.

On the Cotsen Children’s Library blog, Jeff Barton writes about the illustrations of ‘School Days in Children’s Books’ and how they add to our understanding of classrooms and learning environments in the past.

The Chirurgeon’s Apprentice looked at ‘Death’s Doll: The World’s Most Beautiful Mummy’, the unsettling story of a two year old girl who died from pneumonia in 1920 and was embalmed and placed inside the Capuchin Catacombs in Palermo, Italy.

At Frog in a Well, Alan Baumler highlights the extraordinary Chinese film footage that can be viewed online in his post ‘The Internet is Awesome – Chinese History in Film Version’.

Looking ahead to May, at the Furnace Park blog, Adam Smith offers sage ‘Advice from an Eighteenth Century ‘Gardener’s Calendar’. Then, as now, at this time of year, gardeners were advised to pay careful attention to cucumber plants.

Finally, a big thank you to everyone who nominated a blog entry and to those who wrote them. Next month’s History Carnival 134 on 1 June will be hosted by Ian Curry at Vaguely Interesting. Don’t forget to nominate your favourite blog entries from May – see you there!