Today, I’m delighted to be hosting a guest post from Denise Bates, author of Breach of Promise to Marry: A History of How Jilted Brides Settled Scores. Her fascinating book sheds light on this little known law and explores the different ways in which it was used to claim for compensation after a seduction led to pregnancy; to exact revenge and financially ruin an ex-suitor; to illegally extort money in order to set up home with another lover; or simply to seek recompense for ‘hurt feelings’. Here, she offers sage advice for gentleman visitors to Victorian England:

Although the Victorians considered that men were the stronger sex, one very unusual law put them at a disadvantage. Asking a woman to become his wife and then changing his mind could have serious repercussions for a gentleman’s bank balance. Some women enforced their right to compensation for a man’s selfish behaviour by suing him for breach of promise to marry. Usually they obtained £100 damages (current value approx £10,000), but a few came away from court with damages of £1,000 or more to soothe their hurt feelings if a man’s conduct was considered particularly bad. 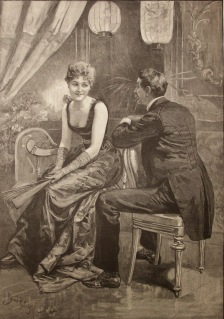 Nine out of ten women who claimed for breach of promise received some money from their former suitor. This high success rate encouraged a few fraudulent claims from artful hussies whose family and friends concocted an unlikely story about a man proposing; or plied him with drink until he did so. Assuming that you have no wish to change your bachelor status or part with any of your hard-earned cash to buy your way out of an unfortunate romantic entanglement, a few simple rules will protect you:

Do not spend too much time with a single woman. Odd as it seems, juries occasionally inferred an engagement from the couple’s behaviour, even if neither party had spoken the word ‘marriage’.

If invited to the family home, do not accept any refreshment from a woman or her relatives unless you know what is in it. A few parents may slip something which causes temporary amnesia into food and drink given to a male visitor.

If you find yourself alone with a woman, immediately check inside the cupboards and outside the room. Occasionally, a friend or sister who was wedged in an unlikely hiding place or standing with an ear against the door overheard a disputed proposal.

If, despite your best endeavours, you find that a woman is threatening to sue you for breach of promise, you have two choices. One is to offer to settle immediately, out-of-court and in cash, as soon as she signs a piece of paper freeing you from all other claims. This is the gentlemanly way to behave as it is discreet, avoids legal costs and will allow you to negotiate a lower figure than the £100 she will be demanding. The other option is to defend the claim. If you don’t mind your name being bandied about in the newspapers and are absolutely sure that you can prove that you never proposed, go ahead and take your chance with the jury. It is a high stakes gamble, but as one woman in every ten lost her claim, lady luck might just be on your side.

Denise Bates is the author of Breach of Promise to Marry, A History of how Jilted Brides Settled Scores (Pen & Sword Books, £12.99). She has investigated a range of cases to discover new information about what a claim for breach of promise meant to the Victorians.

Thanks, Denise! So if you’re a gentleman visitor to Victorian England, add breach of promise to your list of pitfalls to avoid…

Buy on Amazon US